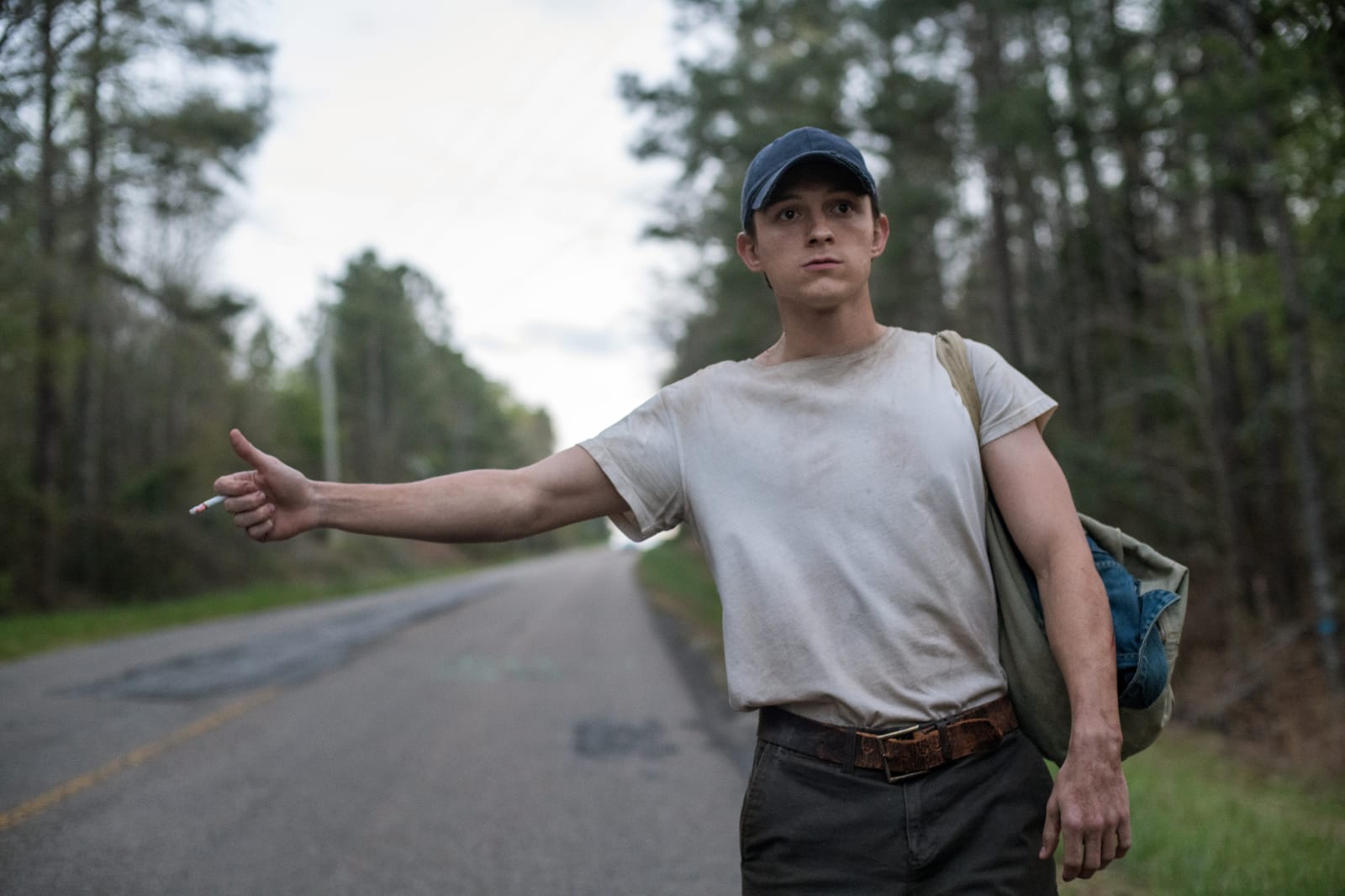 The Devil All The Time released on Netflix yesterday to little fanfare despite it’s stacked cast of superhero stars, and with a source novel of disturbing content and the opportunity for it’s shiny young things to go super dark I was very keen to check it out.

Based on a 2011 book of the same name, The Devil all the time is set in the aptly named ”Knockemstiff” a town in rural Ohio in the postwar years. It covers several intertwining stories, focusing mainly on around 15 years in the lives of Willard Russell (played by a harrowed Bill Skarsgard) and his son Arvin (Tom Holland) who suffer one misfortune after the next whilst navigating a hardscrabble existence. Willard is a traumatised WW2 vet and becomes an increasingly religious fanatic, dragging his small son out to the woods to pray and sacrificing the beloved family pet to God when his wife falls ill. It’s grim stuff, and Christian fanaticism will become a recurring feature of the film. Also living in the town are Carl and Sandy (Jason Clarke and Riley Keogh) a sexual sadist husband and wife serial killer team, and Sandy’s brother Lee (Sebastian Stan), the corrupt local sheriff hiding a number of misdeeds.

Around 12 years later Arvin is now living with his grandmother and adopted sister Lenora (Little Women’s Eliza Scanlen) and they have the hopes of being a normal loving family, Arvin is caring and protective of Lenora who is a pious and innocent young teen being bullied at high school. Things all fall apart when a predatory new preacher (Robert Pattinson) moves to town and sets his lustful sights on naive Lenora – sending Arvin off on murderous rampage in the name of protecting himself and his sister from those who’ve done them wrong.

It’s a super complicated plot and I haven’t even mentioned all the characters. Wartime torture, bizarre expressions of religious faith, suicide, sexual assault and a hell of a lot of murders: in short a cast of depraved characters doing horrible things to each other whilst poor young Arvin tries not to be corrupted by it all. It does feel overstuffed, and whilst it must be hard to know what to cut when adapting a book it could have done with one less plotline. Whilst all the characters stories do eventually interlink in a way that makes narrative sense some of them lack the emotional weight to make them feel necessary and for a film with such a dark storyline it really lacks a punch.

Whilst there are scenes of graphic violence and harrowing emotional moments the film flits over them far too quickly, leaving the audience feeling largely unphased and uninvested in what should be disturbing content. It oddly lacks tension, despite there being a number of scenes where characters are literally on the run or fighting for their lives. (Interestingly, director Antonio Campos previously produced a film that was a MASTERCLASS in building tension – 2011’s Martha Marcy May Marlene – check it out.) It presents these extreme characters in a strange sort of detached tone, giving us little insight into why these people are the way they are. It’s a bit unsatisfying.

Whilst it may make some unbalanced editing or storytelling choices where the film excels is it’s absolutely stellar ensemble cast. Though there are no weak links the stand out players are easily Tom Holland and Robert Pattinson. Holland proved himself a seriously talented actor long before getting picked up by Marvel with his emotive performance in tsunami drama The Impossible, and the array of traumas his character has to go through here give him the chance to really show his skill. Delivering a genuine, earnest performance he is at his most powerful in his scenes with no dialogue. His fight scenes are raw and believably rage filled and he’s got wonderful expressive eyes – surely one of the best criers in the business!

Pattinson is absolutely chewing the scenery as the sleazy preacher, nailing a killer Southern accent and delivering his sermons with an intense evangelical fervour – his performance is pitch perfect for his cruel conniving character. The best scenes of the film are those between Holland, Pattinson and Scanlen as the preacher gets his hooks into Lenora and Alvin tries to protect and then avenge her. If you could lift out the hour or so they spend together on film it would make a very strong independent story indeed. Sebastian Stan also stands out as the corrupt town sheriff though his character isn’t given a huge amount to work with. I love that he is a daring actor consistently taking deeply unforgiving character roles (see I, Tonya, Destroyer) whilst simultaneously being the hugely popular Marvel heartthrob to teen girls (see archive of our own or fanfiction.net, lol.) I hope he gets some more recognition following the upcoming release of The Falcon and the Winter Soldier.

Ultimately, I’d consider this a film worth watching for it’s very strong performances, however it’s wishy washy tone sadly means it is not greater than the sum of its parts and is unlikely to be particularly memorable for casual or awards viewers.

Have you watched The Devil All The Time? Let us know what you thought!