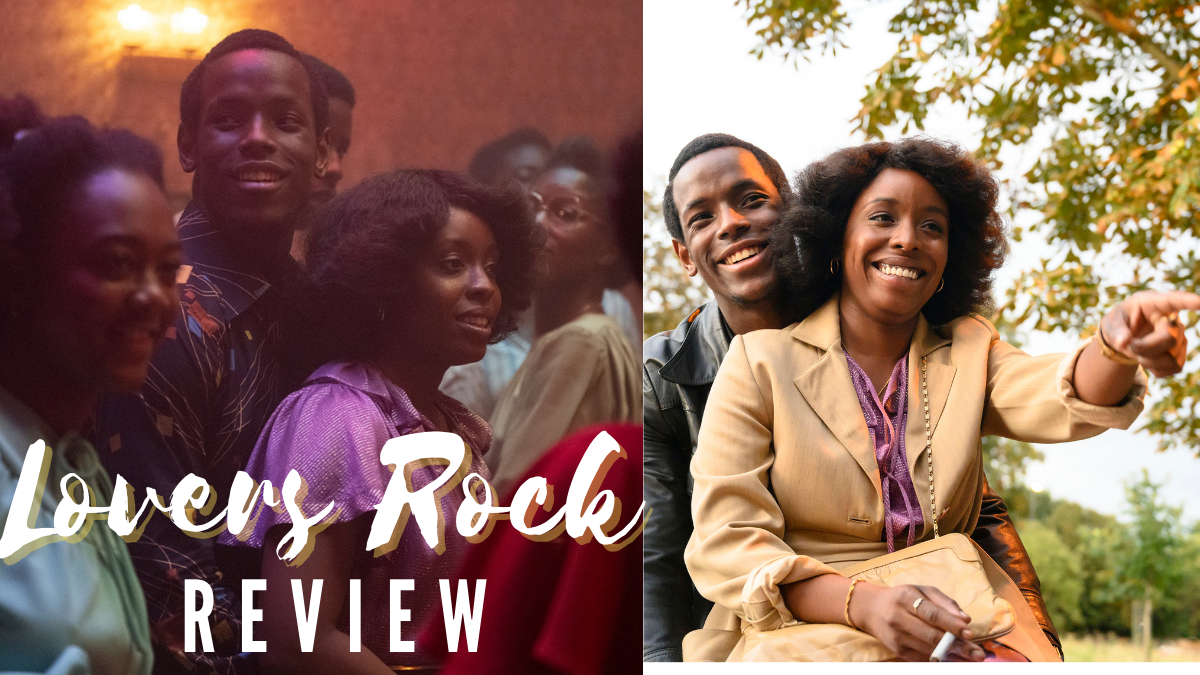 Steve McQueen’s Lovers Rock lets us fall in love for the first time, all over again to the classic Caribbean sights and sounds of West London in the 1980s.

Do you recall that one house party you attended in your youth when you actually met someone special? They added the perfect soundtrack and you just got lost in the music? The slow seductive baselines pounds and resonate through your body. You can’t help but close your eyes and sway from side to side with pure pleasure. And the infectious melodic vocals have you singing along like you had written the song yourself?

This is the sound of Lovers Rock. The music originating in Jamaica in the 1970s and by the 80’s it had established itself as one of the predominant sounds of the growing West Indian youth in London. Steve McQueen attempts to transport us right back to those parties

The film focuses on just one night in Ladbroke Grove and shows the beginnings of a blossoming romance. Newcomer Amarah-Jae St Aubyn leads a great supporting cast as an independent teen who sneaks out to attend what is sure to be the best house party ever (well at least until the next one!). Despite the short running time of the film, she manages to convincingly convey such a wide range of emotions, from mischievous to sharp-tongued quick-witted young lady to a tough fearless defender, unwilling to ignore another girl in real trouble.

Michael Ward co-stars as the other half of this romance and follows up his performance in Blue Story with another solid turn but the film is firmly held together by Amarah-Jae’s honest, layered performance. The pairs eventual love connection and growth into early ‘couple hood’ feels natural and heart-warming to watch

Lovers Rock captures the sights and sounds of the period perfectly. The red phone boxes, the bus conductors, kids with ‘boom boxes, they’re all here. Unfortunately, so are the simmering tensions and undertones of racism which were prominent during this period. But for this project, McQueen decided the music and love story would be his primary focus, much like the characters in the film who acknowledge the racism but choose to avoid it in favour of the fun they anticipated that night.

At times, the camera pulls us in so close to the action, every sensual moment is felt. The heat and sweat almost radiate off the screen. If you ever attended a house party in your youth, you are sure to be transported right back there. And if you haven’t, the level of detail here is so well realized, you will feel part of the raw excitement and energy.

The music and songs of Lovers Rock are crowd pleasing classics you may have heard your parents playing when you were growing up. As the two main characters dance and the camera pans low, it captures the moment their bodies perfectly synchronise in a ‘slow whine’. You almost feel you’ve witnessed the exact moment they fell in love!

All the elements you would expect from a house party are here, from the rowdy guys to the girls vying for attention to the off-key sexual predator and the guy with issues who just wants a fight. It’s all here in this small package and yet somehow, we manage to learn more about some of these characters than we would in a full-length feature.

Steve McQueen is a great storyteller and has crafted a tale here not to teach us anything new but to remind us of what we had, and the way things used to be. Despite some serious issues at the time, people were still able to meet, have fun and fall in love, all to the soundtrack of their own generation.

If you are of a certain age and were ever curious about how your parents met in the 80’s, it probably a story not too dissimilar to this. If you were present during the time and just want a sweet, unflinching trip down memory lane, warts, and all, then this will bring you back those joyful memories.

These are moments in our history which still resonate strongly even today. When you’re young, the places and songs you fall in love to are never forgotten and Steve McQueen manages to capture and restore these feelings of excitement, anticipation, danger, and joy quite perfectly