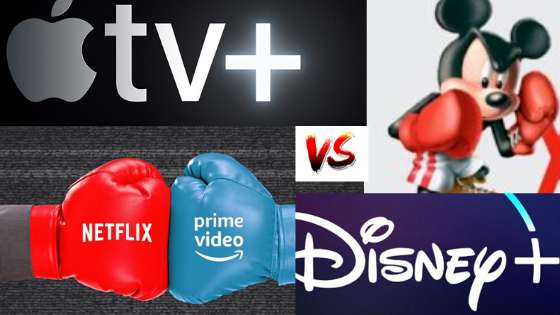 A battle has been brewing just under the surface of the entertainment industry for the last few years. Lines have been drawn and tactics deployed. Come March 24th, Disney officially enters the UK streaming game and at that point, these Empires of entertainment will officially be at war. This may not be life or death but with so many horrible things going on around us everyday, how we choose to be entertained is one of the few areas we still have control over. The impact the right song, movie or TV series can have shouldn’t be underestimated. The right show can lift your mood or transport you to another world.

About 15 years ago many of us were begging for an alternative to escape the sometimes extortionate costs of Cable tv companies. Everyone dreamed of a world where we could cut the cord, ditch our satellite dishes to just pay and watch the programmes we wanted, when we wanted. Netflix were the first to seriously answer the call whilst many of the big players saw on demand subscription services as incompatible with their business model. When Netflix were starting out, they offered to sell their young business to one of the industry leaders, Blockbuster Video for $50 million. Blockbusters laughed them out of the office, saying it wasn’t worth half that much. We all know how that story went. The point is Netflix were the first to see the opportunity to do something new and take a chance. Due to that early experience, they understand that being on top, like Blockbusters, is no guarantee for the future – you must keep changing, innovating and never take your position as No1 for granted.

The majority of the Entertainment industry has accepted that an all you can eat subscription model is the way forward, be it for music with Spotify or for games with new services like the Xbox Game Pass proving a huge success. With any all you can eat buffet, we want lots of choices on the table, just in case we don’t like something or we’re just not in the mood for particular items. So enough variety at the right price is essential. Unlike the music industry where most services have the same songs regardless of whether you choose Apple music or Spotify, these visual services have chosen to use exclusive original content to set themselves apart and compete for customers loyalty. This may on face value seem good for consumers, i mean when is competition not good? When it triples our costs.

Sidenote-I am fully aware of the various methods to acquire content for ‘free’ but apart from questions of legality, a bad experience in my youth soured me to those particular avenues. Firstly, whilst watching a great series, I attempted to play episode 7 out of 15 only to discover not only was it not the right episode, it wasn’t even the same show. Episodes 8-15 were correct but despite extensive searching at the time, i couldn’t locate missing episode 7 and i never finished that particular series. Secondly, having been involved in the industry for a while, I understand the efforts involved in creating something original over months or even years. Then hoping lots of people genuinely like what you have made to make the time and financial investment worth while. This can be a mammoth sometimes soul crushing task with no guarantee of success, regardless of the creators financial status. Even Disney have had films that have flopped! So if someone creates something I really like, I see the value in it and will always try to make my financial contribution to their continued creativity. (Sermon over).

Right now, we are spoilt for choice. We want them all but with these services fragmented, we can’t afford the time investment (or money) to have them all. So what’s our best option? We are currently in a golden age of Television. The quality of most shows is so high. Everyone you meet will assure you the show they are watching is the best show on TV. None of us want to miss out on the shows everyone is talking about but can we keep up?

Is it time to Cross the Streams?

Despite having not even launched in the UK, Disney plus are poised to hit our shores with the force and impact of an earthquake. 10 million subscribers on the first day in the US!?! For Netflix it must be like being at the top of the premier league then hearing Cristiano Ronaldo is joining the fifth place team- You know they will be coming for your title very soon. Disney bring with them their ENTIRE Disney back catalogue, that’s almost 100yrs of material plus all the recent Star Wars and Marvel movies, for £5.99 a month. As if that wasn’t enough they will also be creating original Star Wars and Marvel shows that will tie in directly to cinematic movies in their respective universes. They already have their first hit show called ‘The Madalorian’ which is a star wars spin off. Disney Plus will launch this March with all guns blazing.

As the reigning leader of home streaming, Netflix has brand loyalty, recognition and awareness like no other. Phrases like Netflix & chill and the Netflix brand as a whole have become as synonymous with home streaming as everyone referring to vacuum cleaners by the brand name Hoover. This puts a massive target on their back and explains why Disney began removing their content from Netflix over just a year ago. Netflix is the only one of these big four companies that has TV and film as their sole source of income. It’s what they specialise in, where they are innovating but it’s also leaves them vulnerable. Unlike the others they don’t have billions of dollars in the bank. They don’t have alternatives businesses like Apple, Disney and Amazon. So this means they have borrowed and continue to borrow extortionate amounts of money. They are deep in debt so I have concerns about what happens if that debt bubble bursts. Netflix charge between £5.99-£11.99, depending on the package. In terms of variety of content they are currently unmatched. I also admire their investment in local film makers from different countries and bringing that international content to any of their customers worldwide who want it. They have continued to reduce their reliance on shows from elsewhere and have a vast range of ‘Netflix Original’ programming under every conceivable genre. Their recent successes include Martin Scorsese’s The Irishman and Henry Cavil in The Witcher’.

Apple are the babies when it comes to creating content. They come to the game with brand recognition and lots of money to attract big directors and talent, with shows in production from the likes of Oprah Winfrey and Stephen Spielberg. Their Apple TV + had a very low key UK launch and at £4.99 is the cheapest of the big 4 but it also noticeably has the least content. They have approached with a ‘quality over quantity’ outlook. Their stand out shows at the moment are ‘SEE’ staring Jason Mamoa and ‘The Morning Show’ which sees Jennifer Aniston return to television alongside Hollywood heavyweights Steve Carrell and Reece Witherspoon.

Amazon Prime Video has been around almost as long as Netflix and has similar origins as a DVD by mail rental service called Love film. Unfortunately they didn’t make the jump to producing original content till much later which has left them playing catch up massively. Despite having very deep pockets, their name is still synonymous with shopping and deliveries rather than streaming movies and TV shows. They have tried re-branding themselves as ‘Prime Video‘ but it just hasn’t caught the imagination of the public like the name Netflix. Quite possibly they were too late to the party and lost that mind share. Having said that they have still had successes with the likes of ‘Transparent’ and the ‘The man in the High Castle’ showing they are still serious contenders. The most recent success came from the twisted adult superhero show ‘The Boys’. They prefer to package your subscription with Amazon prime giving you free deliveries for £7.99 but you can get movies for just £5.99

So it comes down to choices. Will you choose to have your cake and eat it? I predict you could get by with a two streaming service combo. But which two will satisfy you?

5 of the Best – Movie Martial Artists

One thought on “Game of Streams”