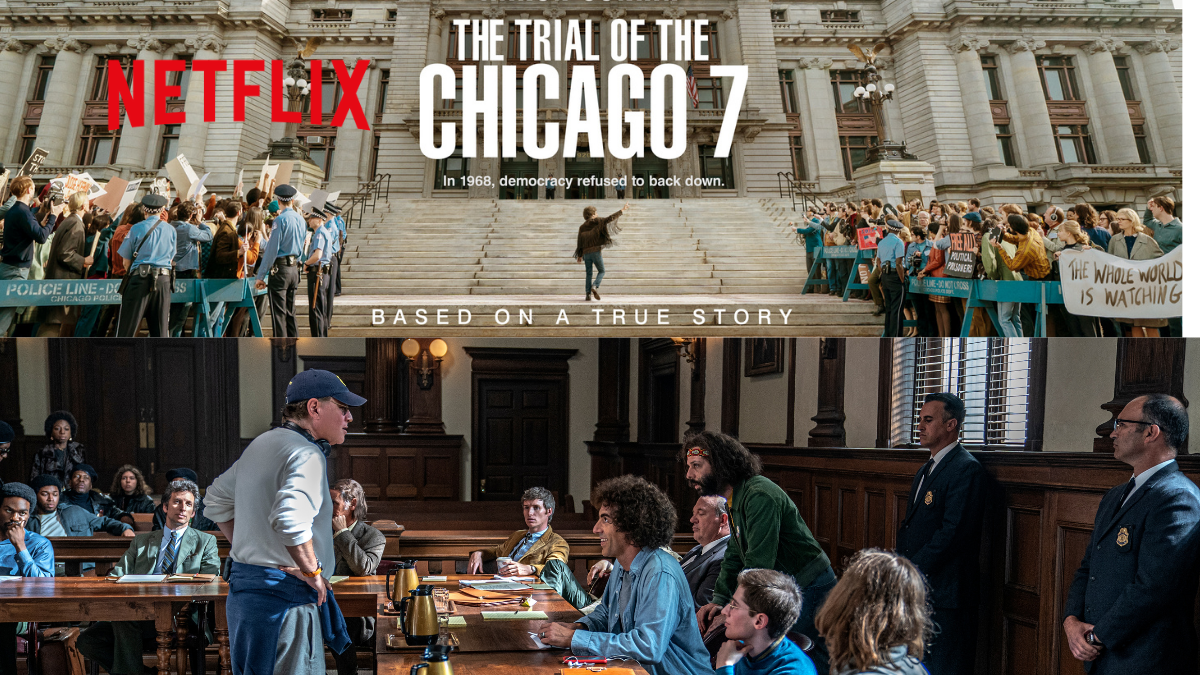 Written and directed by Aaron Sorkin, The Trial of the Chicago 7 is a courtroom drama based on the real-life trial of the titular ‘Chicago 7’ – a group of anti-war, left wing activists who were charged with inciting riots at the 1968 Democratic Convention. Despite having screenwriting credits on films as far back as 1992s A Few Good Men as well as more recent screenwriting duties on films such as Moneyball, The Social Network and Steve Jobs this is only Sorkin’s second film that he has directed following his directorial debut with 2017s Molly’s Game.

The film sets the scene opening with introductions to the main characters, interspersed with authentic stock footage of events as they happened back then. Joseph Gordon-Levitt brings a boyish innocence to the role of Schulz, a prosecutor with a moral compass who wants to do the right thing despite pressure to secure a prosecution against the 7 at any cost, contrary to his core beliefs.

Mark Rylance is brilliant as the lead defence judge William Kunstler as are the rest of the stellar cast including Eddie Redmayne as the passionate de facto leader of the 7 Tom Hayden and a semi-serious turn by Sacha Baron Cohen, allowed licence to bring levity in most of his scenes alongside Jeremy Strong’s Jerry Rubin to provide balance to the mostly serious and bleak proceedings.

Although titled the Chicago ‘7’ the film also highlights the plight of Black Panther’s co-founder Bobby Seale who was charged along with the 7 and his struggles in trying to get the basic levels of rights afforded to him as an American citizen despite machinations in place denying him such culminating in a shocking act against him that highlights how black people especially were treated with complete and utter contempt back then.

Even if you are aware of the outcome of the trial, the film remains tense, gripping and compelling as the defence struggle to clear themselves with the odds heavily stacked against them. Despite the film taking place over 50 years ago parallels can be drawn today with some being able to argue that the failings of the justice system on display here are still prevalent right now making the film both relevant and relatable to today’s audience.

Due to a dearth of film releases caused by the coronavirus pandemic it is highly likely that this film will receive strong award recognition but, even if the normal film schedule were in place, it would be difficult to deny this film the recognition it deserves. Great direction, cinematography and magnificent acting make this one of the films of the year so far.

The Trial of the Chicago 7 is in cinemas and streaming on Netflix now. Watch the trailer here