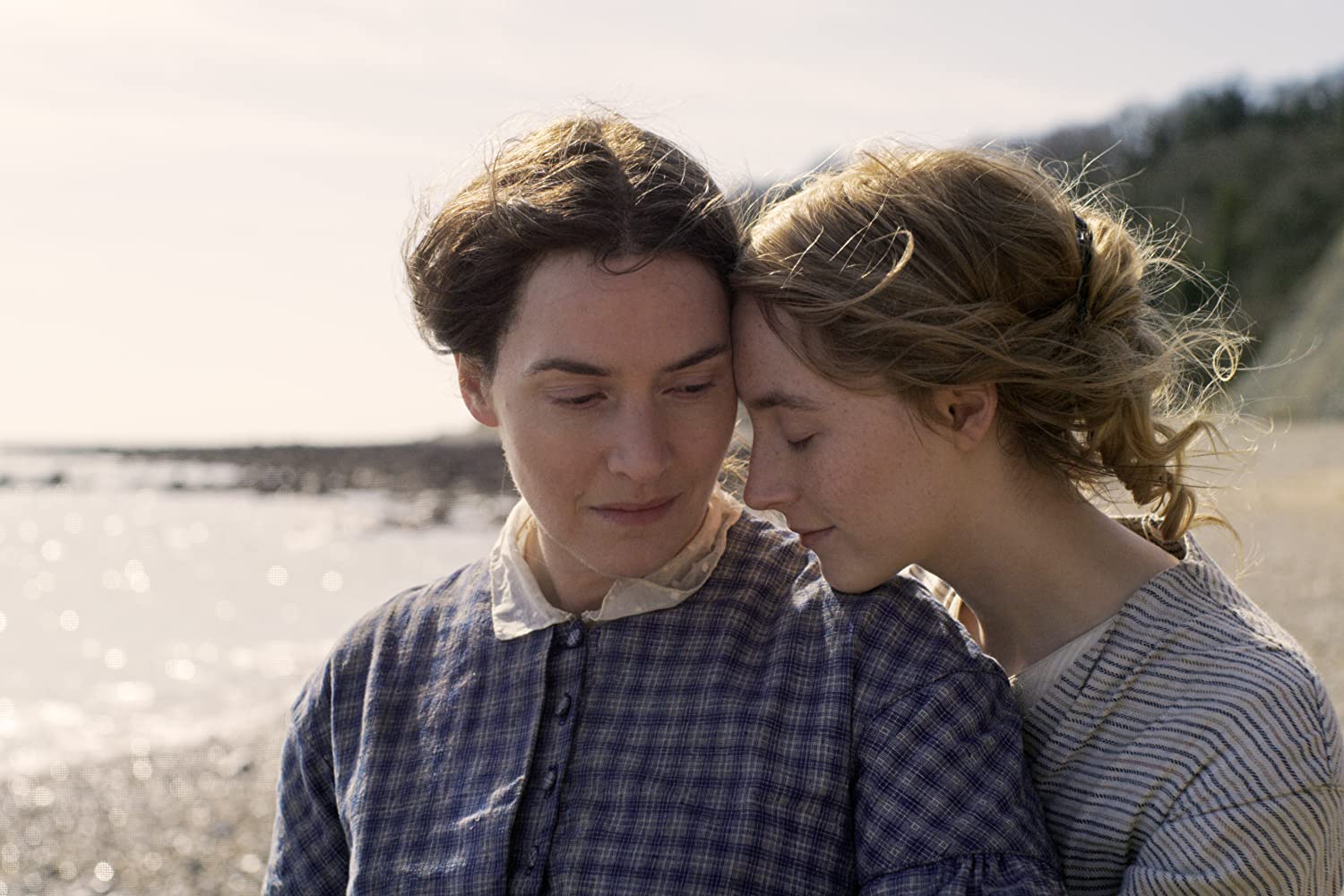 Ammonite is the second feature film from British writer/director Francis Lee. His first film God’s Own Country won awards and hearts all over the world, making Ammonite one of the most anticipated releases of 2020. Kate Winslet stars as Mary Anning, (a real figure though this is a fictionalised version of her life) a skilled paleontologist who now with her years of fame behind her ekes out a living finding and selling fossils on the Dorset coast. Her life is turned upside down when she is charged with looking after Charlotte Murchison, (Saoirse Ronan) a young newlywed who has been sent to recuperate at the seaside following an illness. With Charlotte’s husband away, she and Mary begin an intimate affair.

Ammonite is a beautiful piece of work grounded in appreciation of it’s setting. Filmed on location in Lyme Regis, Dorset nearly every scene is soundtracked by the crashing waves of the Jurassic Coast, it’s a rhythmic, soothing thing. Much like in Lee’s previous work there is near documentary level of attention to detail in creating the minutiae of it’s characters lives – sets are grimy, actors aren’t made up, thought is given to things like bathroom habits and bathing, nudity is practical and not specifically written to titillate which is really refreshing. There’s some beautiful, bleak cinematography from frequent Jacques Audiard collaborator Stéphane Fontaine highlighting the odd loneliness of the grey English coast. This is clearly a film made with great love.

Kate Winslet is wonderful as Mary. Guarded, fiercely independant and entertainingly foul mouthed she gives a brilliantly subtle performance of a woman afraid to let anyone in. Ronan brings such range to Charlotte, starting as the stone faced typical Victorian woman suffering grief but blossoming into the free spirited joy of a young woman in love. These are two actresses performing at the very peak of their abilities and their romance is a lovely thing to watch unfold. Sensitively and gradually done, great weight is given to soft touches, knowing glances and acts of service over hollywoodised declarations. It’s a delicate, subtle thing that spirals believably into hot and heavy physical scenes that are handled with great respect and care for it’s two stars. Ammonite’s cast is rounded out by Gemma Jones and Alec Secareanu who return from God’s Own Country, skilled theatre actor James McArdle and the ever excellent Fiona Shaw.

Ammonite is a rare and precious find, a period romance that charms with a loving attention to detail and a simple but intimate focus on two brilliant actors. It cements Francis Lee’s position as one of the most exciting filmmakers working in British cinema today.

Ammonite premiered in a special nationwide screening as part of the BFI London Film Festival on 17th October 2020. It’s general release is expected in 2021. Francis Lee is nominated for the IWC Schaffhausen filmmaker award.